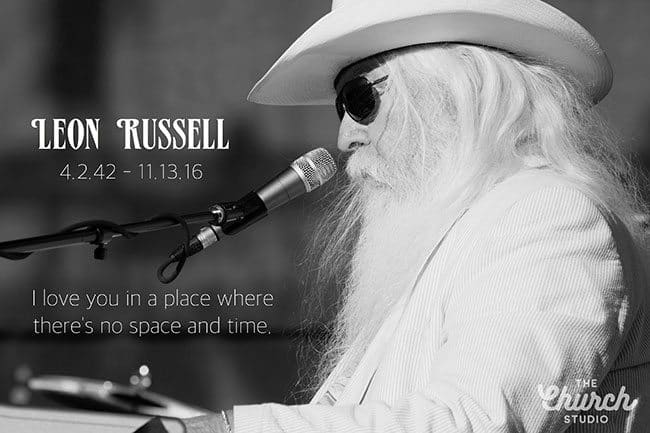 Leon Russell was born Claude Russell Bridges on April 2, 1942 in Lawton, Oklahoma.  Leon passed away on Nov. 13, 2016 in Nashville at the age of 74.  His wife said that he passed away in his sleep.  Russell’s website wrote. “The Master Of Space And Time was a legendary musician and songwriter originally from Tulsa, Oklahoma who performed his gospel-infused southern boogie piano rock, blues, and country music for over 50 years.”

All across the world;  friends, family, celebrities and other musicians expressed their condolences.  Below are just a few…

My darling Leon Russell passed away last night. He was a mentor, inspiration & so kind to me. I loved him and always will #LeonRussell #RIP pic.twitter.com/u2d1KccCNp

Read the obit, then listen to his masterpiece, Song for You. Leon Russell, Renowned Songwriter and Musician. https://t.co/1NoSq2i0e5

Up On A Tightrope singing A Song For You LEON RUSSELL! RIP.

So long, Leon Russell. You played your heart out and we will miss you. Thank you for sharing your divine talent with us. ❤️#LeonRussell

So sad to hear Leon Russell has passed away. A great influence and songwriter. God rest his soulhttps://t.co/xMjBfPkFAV

RIP my friend of 50 years, generous trail blazer, Leon Russell, who rescued me and remained a gentleman throughout Hollywood's trials.

The magnificent Leon Russell amazing musician, true superstar "Long ago and so far away,I fell in love with you..After the 2nd show" R.I.P

Just got word that Leon Russell has passed away
Rest in peace Leon
You left a lot of great music behind you.