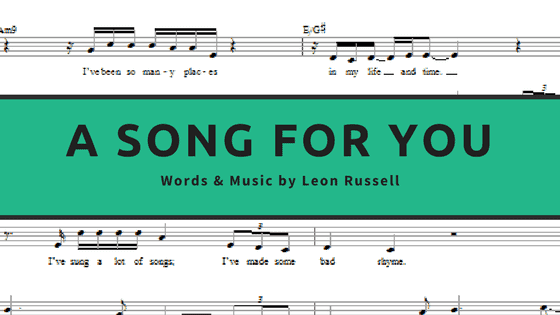 Leon Russell’s 1970 instant classic “A Song For You,” a mainstay on all reality singing competition shows, and a song that has been recorded by scores of prominent recording artists (and hundreds of not-so-prominent), was recently voted into the Grammy Hall of Fame. Russell originally released the song on his 1970 debut solo album on Shelter Records, an independent label he co-founded with then-partner, record producer Denny Cordell. Here are a few things you might not know about one of Russell’s best-known compositions, and a song he performed at each show, usually as a solo spotlight song, till his passing in 2016.

1. “A Song For You” was recorded by Russell in January, 1970 at Sunset Sound Recorders in Los Angeles.

To round out his debut solo album, Russell recorded additional tracks in Los Angeles to compliment the all-star sessions he had recorded in London at Olympic Studios. “A Song For You” was one of those additional tracks (along with “Hummingbird,”“Old Masters,”“Dixie Lullaby,” and “Give Peace A Chance.”) Russell booked time at Sunset Sound Recorders, a recording studio on Sunset Boulevard that was created by Walt Disney’s Director of Recording, Tutti Camarata, from a collection of old commercial and residential buildings. Russell sang, played his trademark piano, and played tenor horn on the track, a throwback to his high school marching band days at Tulsa’s Will Rogers High School. Little did Russell know that this simple arrangement of his composition would have such timeless appeal and touch so many with it’s heartbreaking lyrics.

2. Russell never released “A Song For You” as a single.

Despite its future success as a “standard” within the recording industry, Russell never released “A Song For You” as a single, opting to release other songs from the debut album which he and Cordell thought were more commercially appealing.

3. Donny Hathaway is frequently mistakenly credited for writing “A Song For You.”

Hathaway recorded a what many call a transcendent performance of the Russell composition, maximizing the song’s emotional potential to the point that the original was almost considered a cover of his version. Performers on the singing shows sometimes mistakenly cite Hathaway as the songwriter when introducing the song, enraging Russell fans everywhere, and causing a temporary but intense blast of angry emails, phone calls, and social media posts to the offending network.

4. Russell set out to write “A Song For You” as a standard even though it only took him about ten minutes.

Russell has mentioned over the years that it only took about 10 minutes to compose “A Song For You,”and when he wrote it he had crooners like Frank Sinatra in mind, as well as Ray Charles. The song was eventually covered by everyone from Peggy Lee to Amy Winehouse, and has kept Russell in mailbox money for many decades. Ray Charles won a Grammy Award in 1993 for Best male R&B Vocal Performance for his version, which used the original Russell piano intro almost note-for-note.

5. Tulsa Sound pioneer and Russell friend Jimmy Karstein may have been the first person to hear Russell perform “A Song For You.”

Russell recorded the bulk of the tracks for his debut solo album released on Shelter Records at Olympic Studios in London over five full days of recording/overdubbing, spread over two weeks, before returning home to Los Angeles. Back home he recorded additional tracks for the album, including “A Song For You.” Tulsa Sound pioneer/musician and longtime Russell friend Jimmy Karstein recalled hearing the Russell composition for the first time, “I came by Leon’s house around 11 PM one night (also known as Skyhill Studios/Leon Russell Recorders). The house was unusually quiet compared to most nights, when there were usually some people around recording or hanging out. But this night no one else was around . I walked in the front door and into the studio, which is an immediate left through the front door, and Leon was setting there at his grand piano, his sleeves rolled up to his elbows. He said, “Hey, I’m working on a new song. See what you think.” And it was “A Song For You.” Like Leon’s other compositions he played for me I thought it was great, and of course original. It didn’t even dawn on me for thirty-years that I might have been the first person to hear that song, because there wasn’t anyone else around at the time when he was working on it. Now I can’t swear to that I was the first person to hear it, but I was at least one of the first people to hear it.”

6.  Leon was so taken by a Whitney Houston live version of “A Song For You” that he sat down and wrote her a letter.

True story that Leon told me years ago. As a prelude to American sporting events, few have topped one delivered by singer Whitney Houston when she sang the Star-Spangled Banner before Super Bowl XXV in January, 1991 in Tampa, Florida. Her rendition came at a particular patriotic time, just 10 days after the US entered the Gulf War overseas. Released as a single, it was re-released after the September 11th terrorist attacks. Her incredible voice mixed with a bare minimum of extraneous notes was a performance to remember. Following her performance during the Super Bowl, Houston decided to carry it over into a concert to honor the troops and their families, and the government and military dignitaries in honor of those returning from the Gulf War. The concert, held live at the Naval Air Station in Norfolk, Virginia on March 31, 1991, was broadcast live on HBO. Russell watched the broadcast, along with millions of others, and witnessed her live performance of “A Song For You.” He was so moved that he sat down and wrote her a letter of appreciation on how much he enjoyed her rendition, which he said he never did. He said never in his wildest dreams did he ever imagine one of his songs being performed that both brought tears to his eyes and sent chills up his spine. Such is the power of music.