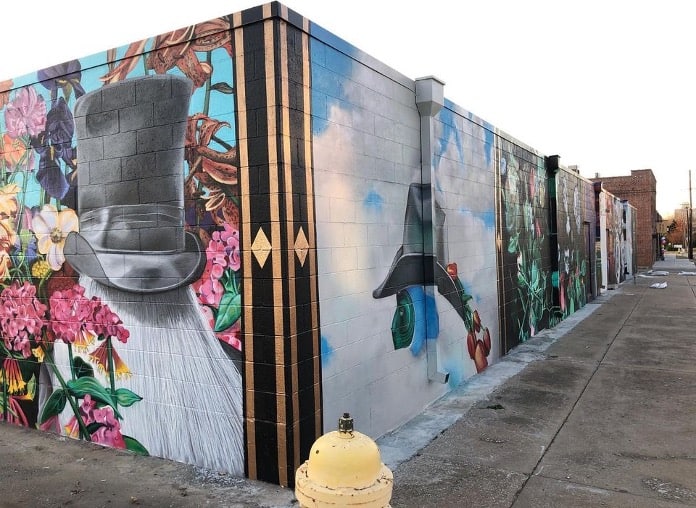 It’s hard to overstate the influence Leon Russell made to the music world in his 60 years in the industry; inductee in the Rock and Roll Hall of Fame, Songwriter’s Hall of Fame, Oklahoma Hall of Fame, Grammy recipient and more.  Likewise, his musical genius made a lasting impact on Tulsa – from the impressions and stories from his high school years – his social significance from age 14 in the backroom honky tonks and local music scene – his reemergence in his hometown of Tulsa in the 70s to settle in, his importance to the community or the emerging rock & roll scene and the  music industry at large.   He was a musical prodigy from age three, singer, songwriter, collaborator, arranger, session musician, headliner, and local rock legend.

There are several local sites of importance in Tulsa that are Leon-friendly.  Step back for an hour or two and follow your heart walking (driving) in Leon’s footsteps. 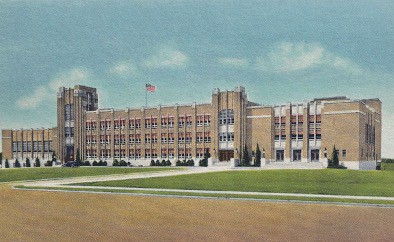 Will Rogers High School: 3909 E. 5th Place- built in 1939 using WPA workers.  The Art Deco masterpiece is listed on the National Register of Historic Places and was named for the Oklahoma humorist Will Rogers.  (photo from a 1940 post card). 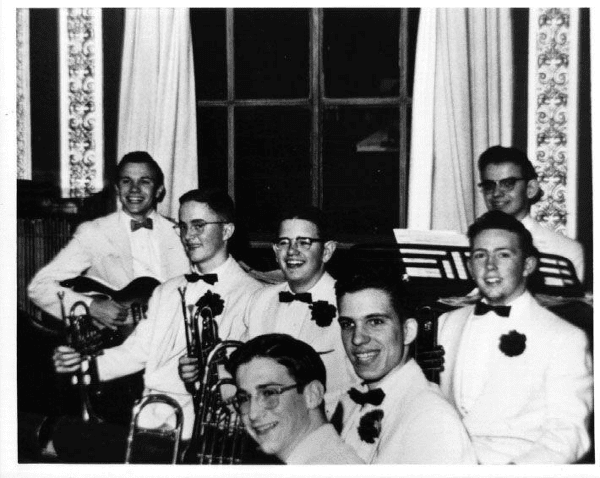 Tulsa’s Native Son, Leon Russell  was born in Lawton, Oklahoma as Claud Russell Bridges  – but moved to Tulsa as a sophomore and attended Will Rogers High School.  Leon fascinated and entertained classmates by playing the school’s 1937 Baldwin grand piano during downtimes.  Leon attended Will Rogers High School from 1956 till his graduation in 1959. 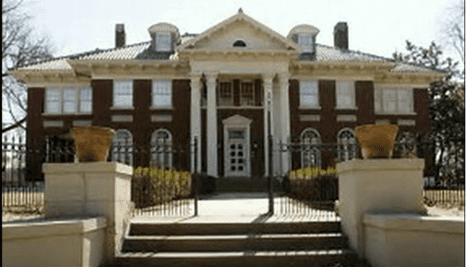 Aaronson Mansion: 1151 E. 24th Place – Leon bought a portfolio of over 50 Northeastern Oklahoma properties in the 70s during the height of his touring career including the Maple Ridge estate below as his Tulsa residence.  A huge Georgian-style home on two acres, was originally built in the 20s by oilman and philanthrope Lionel Aaronson.  As you might expect the house in Maple Ridge was the scene of festivities of all sorts, but primarily warm gatherings of friends rather than raucous rock & roll bashes. In June 1973, Leon’s friend Emily Smith was married at the house as seen in the film, “A Poem is a Naked Person.” In July 1973, Russell hosted a benefit party to help the Maple Ridge Association raise money to pay the legal debt it incurred while opposing construction of the proposed Riverside Expressway. It also housed a recording studio in the basement.  Eventually, the home was torn down due to structural issues and several homes sit on this sacred site. 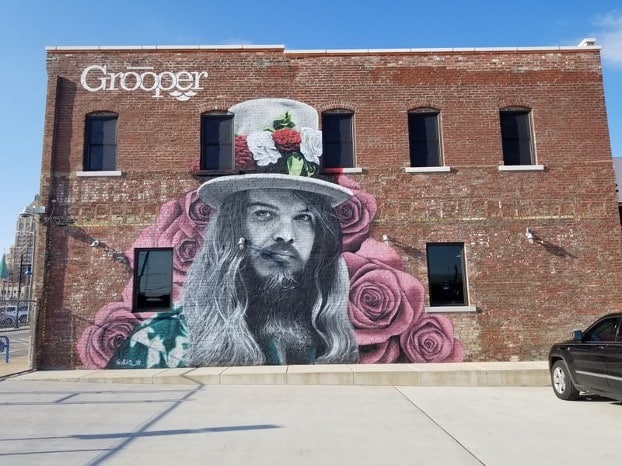 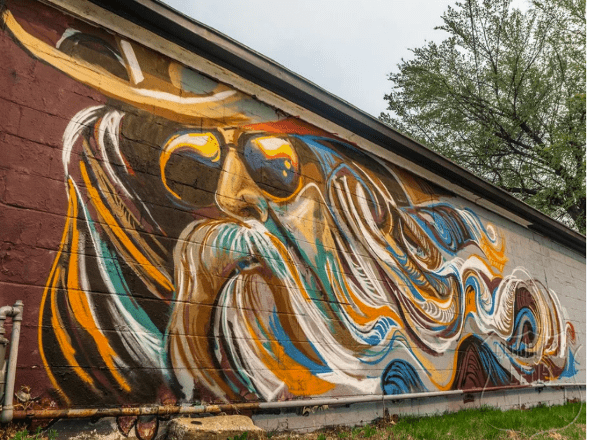 Ranch House Restaurant (currently Freeway Café): 1547 E Third Street – Leon was eating with Denny Cordell and Carla Brown (Blue’s Mother) at the Ranch House Restaurant at 3rd and Trenton just across the street from The Church.  While sitting in the circular booth, Carla saw the “for-sale sign” on the stone-structured Church – they crossed the street and while climbing up the steps, realized that “The Church Studio” would accomplish Leon’s vision to do all genres of music and help musicians fulfill their dreams without all the Los Angeles record company restrictions and entanglements. 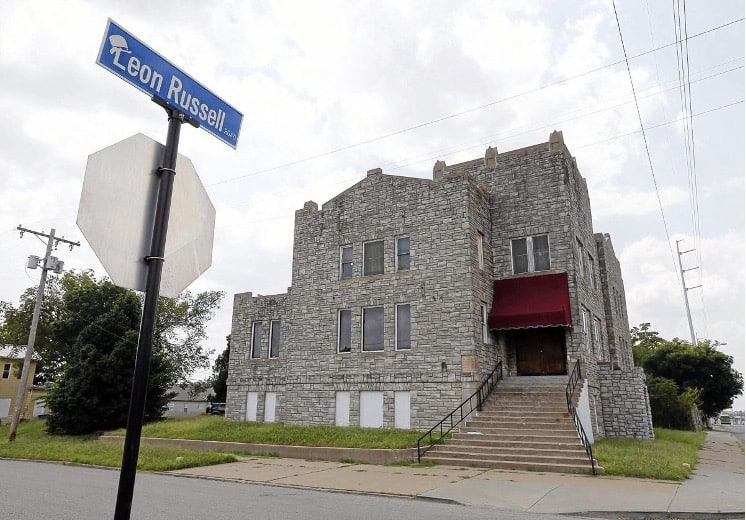 The Church Studio: 304 S Trenton – Leon purchased the Church in 1972, converted it to a recording studio and it became the Tulsa home of Shelter Records.  The brick Gothic Revival structure was built in 1915 as the Grace Methodist Episcopal Church and the exterior permastone was added in 1953, although the church at the time ran out of money and only partially covered the original brick. The building was listed on the National Register of Historic Places in 2017 due to its significance to American music culture and as the heart of the Tulsa Sound.  The Church Studio will open in 2022 as a recording studio, event center, audio engineering school, music venue, exhibit space and archive of items relevant to Leon Russell, other Tulsa Sound musicians and local musical history. Daily historic tours will be available.

Mural of Space and Time: 304 S Trenton – In November of 2020, Jeks, Brian Lewis replicated 8 Leon Russell-inspired oil paintings by P. S. (Patrick) Gordon commissioned by Teresa Knox and painted on 190 feet of the Mac’s Electric building wall just East of The Church Studio.  A mini-documentary of the making of the mural was shown at Circle Cinema in January 2021 as a local piece of the Sundance Film Festival and can be seen here:  https://www.youtube.com/watch?v=tr-IU2oRwGE  “My goal is to pay tribute to Leon Russell’s legacy and the investment he made in his home town in 1972 when he turned an old church into a recording studio,” Teresa Knox said. 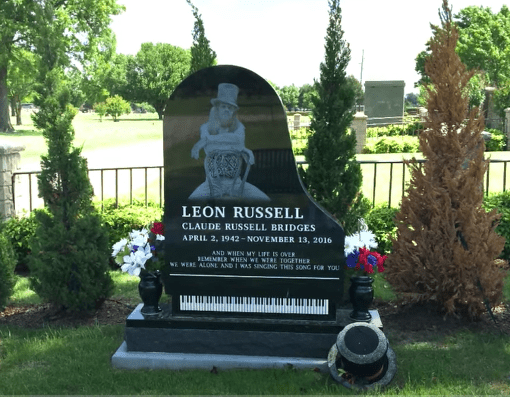 Memorial Park Cemetery Monument:  5111 South Memorial Drive – A memorial for Leon Russell was constructed to commemorate his Tulsa legacy, 2 years after Leon’s passing in 2016. Jim Halsey, whose company once represented Russell, said at the funeral, “Every so often, the stars and the planets align to give us some special event or person. The creator did that with Leon. The stars were aligned and here came Leon Russell. He changed lives with his persona and his music. People that never knew him personally were affected by the depth and seriousness of his music. … God bless Leon and what he has brought to us.”

Other Locations of Note: