Johnny! Can you tell us a little about yourself?

I’m a New Yorker! I was in retail for 38 years and have been retired 10 years. I’m not married. I am very close to my niece Nora, who is a music teacher and her husband Patrick who is a writer, my nephew Brendan McDonnell and his wife Rachel whom are both lawyers, my sister-in-law, Patty McDonnell, and Patrick’s father Lewis Boyton and my girl Vickie in Hawaii. As you know, I’m deeply involved with the LeonLifers.

You were in Tulsa recently, for what purpose?

I’ve been in talks with Teresa Knox for about a year planning a LeonLifer event, and we set up a meeting face-to-face. I had a beautiful time; it was a joy to meet her and get to understand her vision for The Church Studio. Monday, we met to discuss the framework of the 2022 Leon Russell Birthday Bash, Tuesday we got the grand tour of the nearly completed Church Studio. 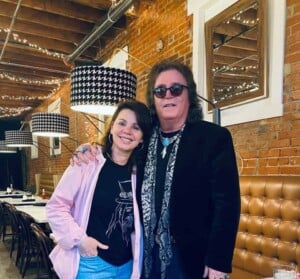 When and how did you first become a Leon Russell fan?

My older brother was a big fan, which was my initial influence. My date and I went to a Leon Russell concert in 1972 at the Nassau Coliseum in Long Island. I was about 15 years old. Leon blew the roof off! The building was shaking, Leon was dancing on the piano, it was like he was preaching to the congregation. That was my introduction to Leon Russell; and I have been a fan ever since.

The New York Times reviewed the Nassau Coliseum concert Johnny and his date attended on Monday the 25th: 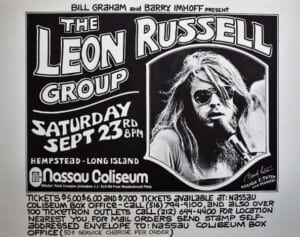 Mr. Russell’s gravelly throated voice executes the gospel and blues‐based twists and turns of phrase that are the heart of his style with almost offhand ease. He did it all at the Coliseum. Backed by a group that included some stellar rock musicians, a gospel pianist and a trio of singers, Mr. Russell worked his heart out in a superb, two‐and‐a‐ half‐hour show that was one of the great rock concerts of this or any other year. Everything was grist for Mr. Russell’s beautifully functioning musical mill. A couple of Bob Dylan songs; some pieces from his own new solo album; the fiery, preacher‐styled med ley of “Jumpin’ Jack Flash” and “Youngblood” that he did at the Bangladesh concert; a mélange of golden oldies like “Delta Lady,” “Stranger in a Strange Land” and his lovely ballad “A Song for You.” Mr. Russell tied it all together with nothing more complicated than steely‐eyed stares, a few connective remarks and, most important of all, the pacing of his music. Constantly surprising, ever‐changing, coming out at the audience with the fleet, sudden movements of a professional football halfback, his music was dramatic in the best sense of the word. Like all great theater, it entertained, it surprised, and it enlightened.

Do you have a favorite Leon concert? How many have you seen?

From 1972-2016 I’ve seen about 70 Leon Russell concerts, all over the country. So many are memorable; but that first one is still my favorite.

What is a LeonLifer? When and how did it start? How do you join?

In 1997, when the internet was relatively new, I was looking for anyone else who might have a passion for Leon Russell and his music. I found a Yahoo Group (a forerunner in social media) which was a discussion board on all things Leon. I felt like I had struck gold. They had 40 members who regularly interacted about their devotion to Leon Russell and even Leon Russell himself had the occasional comment. The group was started by Marcia Bilynsky and Rick Colburn. Steve Burns and Marcia continued to moderate the discussion group after Rick’s passing.

In 2009, Carole Cleveland opened a Facebook Group which now has over 2,400 members and we call ourselves LeonLifers! Our group has become a family and community who are on this journey. The comradery among the members is like a brother or sisterhood.

Tell us a little about how the LeonLifer Shindig Birthday Events got started:

Many Lifers meet at events like the one we’re having next year at The Church Studio. Vacations for the Lifers are planned around Leon-related events across the country. One of Leon’s “Super Fans” was Honey Colburn, an original LeonLifer from Muskogee, Oklahoma. In 2001 she, and her sons Rick and Ron, began hosting barbeques in their home for Leon’s band when they were in town.

In 2003, Honey Colburn, Darrell Mahone, Larry Fennell and I flew to Nashville to meet with Jan Bridges, Leon’s wife and booking agent, to plan for future private Leon Russell shows for Lifers in Muskogee. In 2004, the first LeonLifer Show was held around Leon’s April birthday at the Roxy Theater in Muskogee with Honey’s signature barbeque event at her home for attendees. Sometimes Leon, himself, would attend. Attendance over time grew to nearly 200 LeonLifers. Honey, who is a brilliant keyboard player in her own right, and her son, Ron Colburn, became central figures in the Lifer movement.

The Shindig birthday event became an annual tradition in Muskogee, OK, with the Barbeque at Honey’s home and Leon performing at the Roxy Theater. There was a beautiful light show, and a professional Tulsa sound engineer. Leon was grateful and humbled that so many fans came to the event. 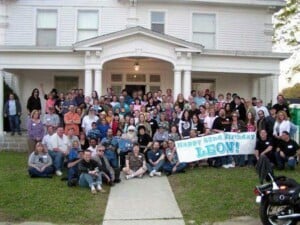 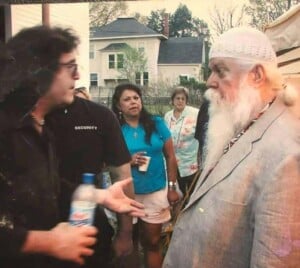 Did Leon acknowledge the Lifers? Can you give an example?

Often the LeonLifers would caravan across country to the concerts. On at least one occasion, Leon saw Honey Colburn from Muskogee in the audience and would say “Oh, Miss Honey is here, the next song is for you,” which brought tears to her eyes. Leon was a very private person and was careful about his personal space – so that was unusual, to say the least. Another time, he saw Nita and Gary Sissell in the audience and said jokingly, “Hey, don’t you guys have a job?” since he had seen them at so many concerts across the country.

You had a tour of The Church Studio when you were here. How was that? Was there something that struck you or surprised you?

I was extremely impressed by the respect Teresa and Ivan have for Leon and their attention to detail in the renovation. Fans will be blown away. I was especially amazed at the old school analog equipment they have tracked down for the control room. Basically, this will be an entertainment complex and her vision and execution are what is incredible. 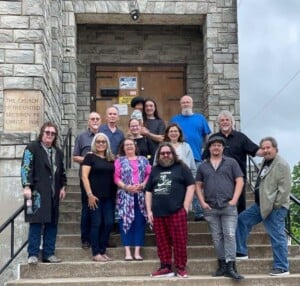 Have you been to The Church Studio before?

Yes, I have been there 2 other times. Once in 2002, it was dark and closed, and we knocked on the door and Steve Ripley let us in and showed us around for about 45 minutes. It was like being on Holy Ground. While we were there, we heard someone walk in behind us and it was none other than Leon Russell to see Steve. It was thrilling.

In 2012 after one of the Birthday Bashes, we had our picture taken in front of The Church. 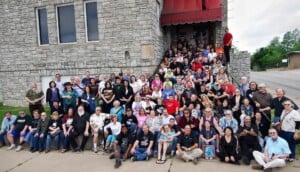 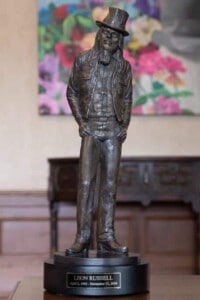 Out of thousands of entries, you won our Leon’s raffle for the limited-edition bronze sculpture of 1972-era Leon Russell in April. Why did you donate it back to The Church?

The Church Studio is the Holy Grail of Leon’s history. I wasn’t actually thinking I’d win; I bought a lot of tickets just to be able to support The Church Studio. I did think, “If I win, I’m going to do the right thing and give it back.” I was waiting in line for the Covid-19 vaccine, and my cell phone exploded with Lifers letting me know I’d won the sculpture. Teresa called to let me know I’d won, too! I told her to take it back and run another raffle to raise even more money for The Church Studio. She even tried to talk me out of it! I’m shocked that I won, it’s all from my heart. I’ve loved Leon since I was a kid. I have so much respect for Teresa and how she’s tried to preserve the legacy of Leon Russell.

When you were in Tulsa you purchased a second Leon bronze sculpture. Wow! Thank you! When do you want to launch the raffle? Why?

After talking to Teresa for almost a year, I really admire the passion and incredible effort they’ve put into honoring Leon’s legacy. I believe Jan Bridges and her family will be very proud of the meticulous reconstruction of Leon’s beloved Church Studio.

I want to launch the raffle for the exquisite bronze sculpture on Leon Day, June 25 and you’ll have 6 weeks to buy your tickets to win the marvelous sculpture.

I love being a small part of what’s happening at The Church! I want to show my continued support and promote The Church in every way I can.