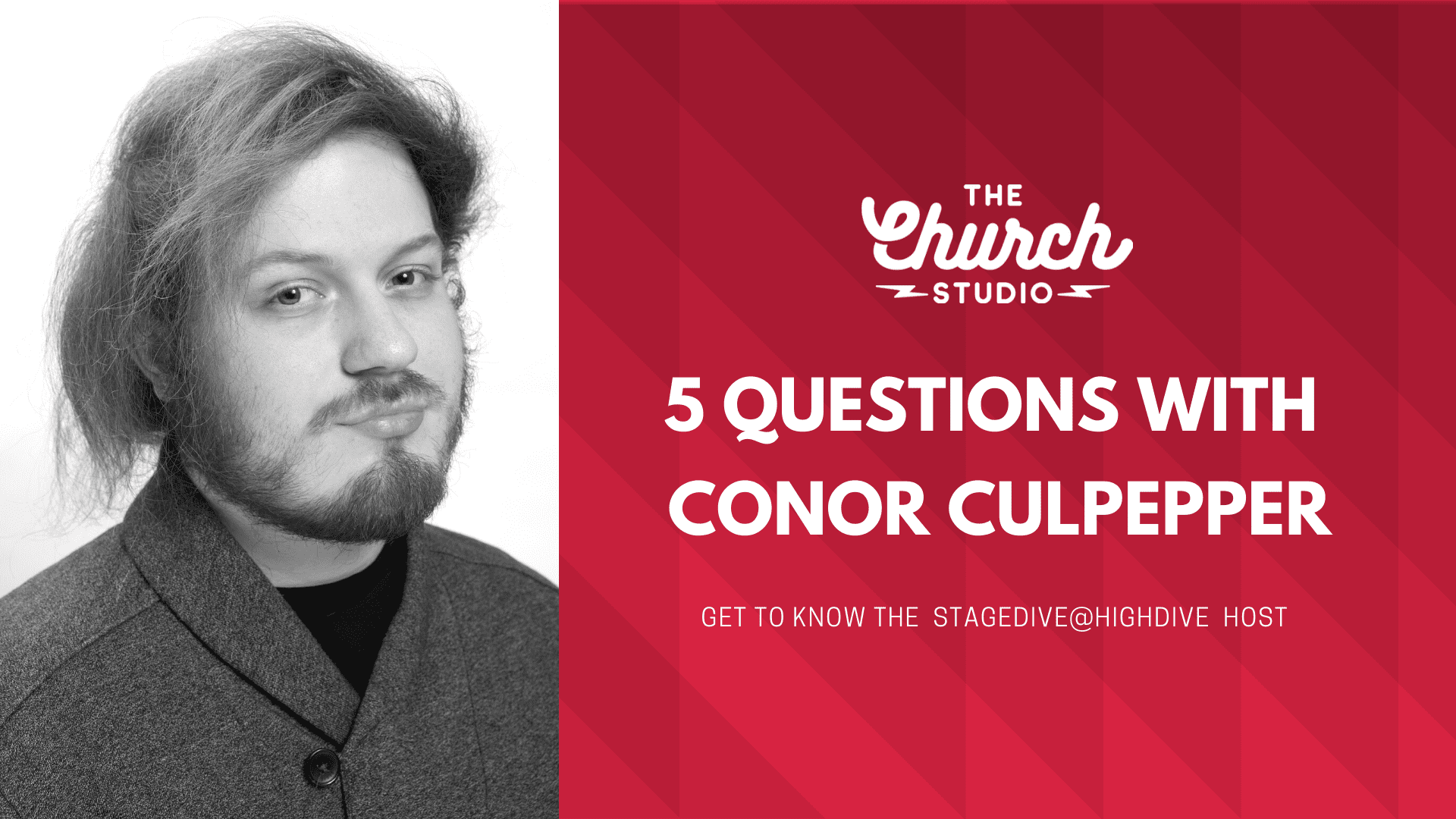 As you may have seen on our Facebook, The Church Studio recently partnered up with one of our Studio Row businessess, High Dive, to produce STAGE DIVE. Every Monday evening, High Dive will open its doors(and stage) to upcoming singer songwriters for an Open Mic. The event is designed for anyone that wants to share their music, practice performing, and even make some friends in the music community. It’s all about community. This wouldn’t be a proper Open Mic without a host and we are lucky to have Conor Culpepper filling that role. At only 19, Conor is already a veteran of Tulsa’s Music Scene. Joining the scene at 11 years of age, Conor has played with Tulsa Legends Steve Prior , Jimmy Markham, Polly Ess, among others. Get to know Conor Culpepper in this short interview!

CS: So we’ve heard about your impressive music career so far, but how did your passion for music begin?

CC: When I was growing up, music always seemed to be a pretty essential part of my environment. Both of my parents loved music and played it regularly around the house. I remember being a kid and singing along to the country music station with my mom in her car, and the many summer nights that were spent at Skiatook Lake with my dad and his friends (who are considered my uncles), listening to all kinds of music; but my first ever live music experience, was The Jennifer Marriott Band with her husband Pete Marriott on guitar, there at the lake, when I was about 7 years old. It's safe to say that I've been hooked ever since.

I wanted to be a piano player after I discovered Ray Charles, but my mind changed quickly when I saw a video of Eric Clapton for the first time - that is when I knew I wanted to be a guitar player. I got more into blues music later, listening to Lightnin' Hopkins (still my favorite), Freddie King, Muddy Waters, Elmore James, John Hammond, Buddy Guy, Little Walter, R.L Burnside, and many other Mississippi delta and Chicago blues artists. For some reason, blues moved me differently than anything I had ever heard, and it gives me the same feeling to this day.

CS: Music is obviously a big part of your life. Tell us about the non-musical side. What do you like to do when you are not playing music?

CC: Before the music bug got me, I was mostly into art, reading, and writing. When I was in second grade, I won an elementary school art competition with a portrait that I had done of Ray Charles, and I ended up winning the third grade short story competition the next year, with a mini-biography on Jerry Lee Lewis. I remember how shocked and embarrassed I felt when none of my classmates knew who either of them were.

I also wrote a fairly long western 'book' when I was about 10, after being inspired by a William W. Johnstone novel. I always had plans to publish it one day, but alas, it remains in a shoebox under my bed. I still like drawing, reading, and writing, but classes at Tulsa Community College and the homework that comes with them take up most of my spare time these days.

CS: What inspires your music?

CC: I read an interview with Jackson Browne once where he said, “Songwriting is way of excavating your understanding.” As I've gotten older, the more I’ve realized how true that sentiment really is. I tried songwriting when I was younger, about 12 or 13 years old, and needless to say, I found that it's difficult to write any kind of meaningful or mature material, when your dad still drops you off at 6th grade. So I waited until I felt ready. Now, most of my music is inspired by my own personal experiences and observations in this life – “excavations of understanding.”

CS: What have been some of your musical career highlights?

CC: When I was 11 years old, I met Steve Pryor, Tulsa blues guitar legend, after seeing his band play at Blue Rose Cafe. He gave me his phone number after I told him I was a fan of Ray Charles, telling me that I was "the first redhead kid who was into Ray Charles,” that he'd ever met. He quickly became my number one guitar hero. Not long after that, I met Jimmy 'Junior' Markham, another Tulsa music legend, who also became a mentor, giving me my first paying gig and having me sit in with his band, The Caretakers, every Sunday night at the Dusty Dog during the summer of 2014. He called it my 'summer school'. Polly Ess, Tulsa blues queen, also took me in under her wing, and became like a second mother to me. We talked on the phone practically every night for 7 years. Other highlights would be : Meeting acclaimed singer/songwriter Jimmy Webb, playing at the Charles Mingus Music Festival in New York City twice with the T-Town Jazz Sound Big Band and getting to share the stage with Duke Robillard, Marc Benno, Samantha Fish, Bob Margolin, Rocky Frisco, Earl Cate, Chuck Blackwell, along with many others.

CS: Tell us about STAGE DIVE. How did you get involved? What are you hoping musicians get out of it? What do you hope to get out of it?

CC: Stage Dive is a wonderful opportunity for young musicians, who may or may not have ever stepped onto a stage before, to express their original music to a warm and welcoming audience, help them overcome their stage fright, and introduce them to Tulsa's vibrant and family-like music community. When I was coming up in the music scene, I struggled with severe stage fright (I still sometimes do), but my musical mentors all lent a hand in helping me overcome my fear. It is an honor to be presented the chance by Teresa Knox to host this very special open mic night, and to hopefully help "give back" by assisting other young musicians, the same way I was helped, all those years ago.

CS: What’s in store for you? What are you currently working on?

CC: Currently, I'm working on my own original music, with the hopes of getting it recorded and published for a listening audience, at some point in the near future. I would like to book more shows of my own and continue to pursue the dream of doing my first tour - Fingers crossed. Wherever the journey ahead leads me, I am sure that music will always be a part of the plan.